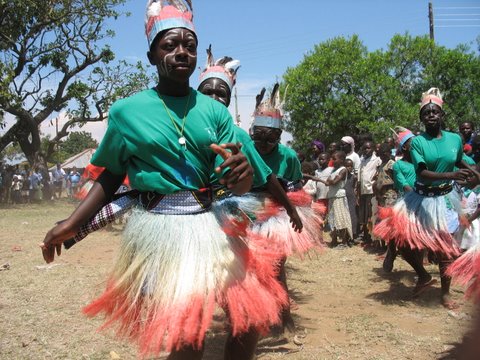 At the request of the local community, Cre8 East Africa carried out its first (pilot) project in August 2006 in Dunga, West Kenya. We did this project in cooperation with teachers and students from the local primary school and a team of local artists.

Pollution of the environment, hygiene and health were central themes in this project. These were translated by the Dunganese children into a theater performance and exhibition. Two hundred children from groups 1 to 8 (6-14 year olds) participated in the workshops and 185 children eventually took part in the festival. Cre8 also collaborated with five primary schools in the Netherlands in an exchange project.

In addition to most of the local population having to live in poverty, Dunga, a small fishing and farming village in Western Kenya, was dealing with poor hygienic conditions. These conditions causing many diseases such as cholera, typhoid, malaria and HIV-AIDS. The community’s desire was to help their children imagine a better future.

During the first week, Sami Gathii and Ben Hekkema gave workshops. The participants, teachers from the primary school and artists from the nearby city of Kisumu, got to know each other by working together and in doing so learned to use a way of working that involved children in the creative process.

During the second week, couples of teachers and artists worked with the children. The children were divided into groups per discipline: drama, dance, mime, stand-up comedy, rap, drawing, painting, music and sculpture. Every afternoon there was a presentation of the children on what they had done in their groups that day. They were working towards a final presentation for a festival.

The festival took place on a Sunday afternoon and was titled  ‘The Next step’ or  ‘Okang Machielo’ in Luo language. The afternoon started with a parade from the harbor (Dunga Beach) to the school. This was interrupted by short plays, dances, songs and a tree planting ceremony. The parade ended in the schoolyard where a stage had been built. The final presentations of the various groups took place here. There was also an exhibition space where the visual work was exhibited.

Many people from the community had come out to see the festival. Also a number of dignitaries and a delegation from the sponsor Oxfam-Novib came. Everyone responded enthusiastically and admired what had been achieved with so many children in such a short time. It was also striking that the children had managed to put their own stamp on the results so clearly.

One of the older residents of the village came up to the Cre8 team and said that in all the years he had lived in the village he never experienced anything so beautiful and that he was proud of the children and what they had achieved.

It has been noted by the participants, the school management and various stakeholders from the community that the project had given a positive boost to the Dunga community. It has been a stimulating and useful experience for the children. Thanks to the festival, the community got national news coverage on the radio and in a national newspaper (The Nation).