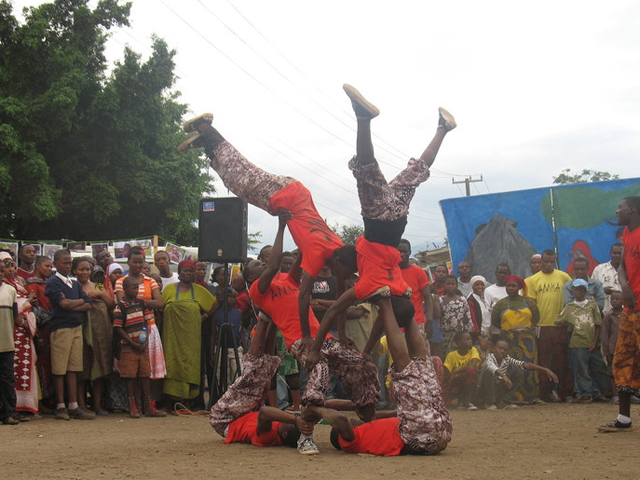 Cre8 East Africa realised a music theater project in Tanzania in 2009 and 2010. Cre8 did this in collaboration with Mkombozi, a rehabilitation center for street children in Arusha and Moshi.

Mkombozi gave the project the title  ‘Engage, Empower, Xpress’. The wish and goal was to reach street children with this project and once in contact to stimulate and help them to lead a normal life in order to have a better future. Between thirty and fifty youths took part in the project. We worked not only with children who lived in the Mkombozi rehabilitation center, but also children from the neighbourhood and children who still lived on the street.

Surviving on the street

When we started our project, the problem of children surviving on the street had grown enormously in the years before. According to figures from Mkombozi, 52 girls and 418 boys lived on the streets in Moshi and 144 girls and 731 boys in neighbouring Arusha. These children were between 5 and 18 years old and mostly came from uneducated families where there was great poverty associated with domestic violence and alcohol and drug abuse.

In 2009 we visited Mkombozi in Moshi and stayed for two weeks. We organised workshops and trained the youths. The project concluded with a performance, ‘House of Talent’.  The audience consisted of children and young people from Mkombozi’s shelter, children and employees of fellow organisations and people from the neighbourhood.

Cre8, Yaden and Mkombozi organised a follow-up project in June and July 2010 with 50 youths. The project consisted of two parts: a music theater performance and a tour with ten selected participants along a number of cities in East Africa.

The fifty young people made a music theater performance, exhibition and film called AMKA! (Wake up!). Their story was about why they ended up living on the street. What problems they encountered. Their ideas for solutions and how the community and government could contribute to this.

In July, after two weeks of workshops, the group performed in a number of cities in Tanzania and Kenya to an audience of in total around 12,000 spectators. In Moshi, Arusha and Dar es Salaam, performances were staged on the street in a residential area or at the local market. Afterwards, spectators were interviewed by our participants about their opinion on street children and the performance.

Most people replied in a tolerant way and thought that a street child who had stolen should be given a second chance after he was sentenced. Everyone thought it was great that the young people could convey such a serious message in such a fun way. In Bagamoyo the young people performed during the Tanzanian Youth Exchange Forum & Festival 2010.

There they performed among professional artists and were rewarded with a standing ovation. With a smaller, selected group, we then brought a modified version of the show to four Kenyan cities: Nakuru, Mombasa, Kisumu and Nairobi.