In the summer of 2011 and the beginning of 2012 Cre8 was in Gulu, Uganda. We organised a music theater project together with Yaden and a number of local partners.

Gulu is located in the poor north of Uganda, where civil war has raged for a long time. Many rural residents fled to Gulu to find a safe haven. Once peace came many youths stayed in Gulu because there was no place for them to return to. Through theater and art, Cre8 wanted to give these war victims a voice and a stage where they can express themselves and work together.

For more than twenty years, Northern Uganda was in the throes of  a civil war with lots of violence against civilians, especially the youths. It is estimated that more than 60,000 children were kidnapped by the Lord’s Resistance Army during this war and forced to kill, rob, or work as sex slaves. Many young people in Northern Uganda are affected by the aftermath of this war. Fortunately, there are many organisations that have taken to the suffering of these young people such as Warchild and SOS children’s villages.

Many communities have also set up youth organisations themselves and groups have been re-established in and around Gulu and they try to bring the beautiful culture of the local population, the Acholi, back to life. We have worked with a number of these groups. In November 2010 we visited these groups to get acquainted. In August 2011, we gave workshops and trained the group leaders and in 2012 the groups organised a street festival, ‘Kati Atyer (Break the Silence)’, which continued in the years after under the title ‘Wer Waa (our song) Festival’. 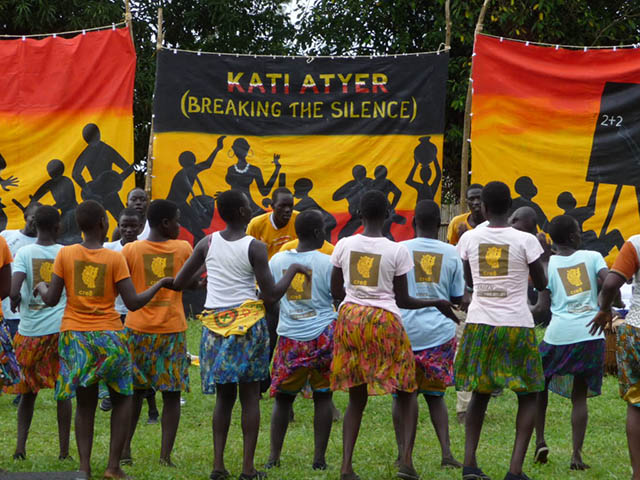